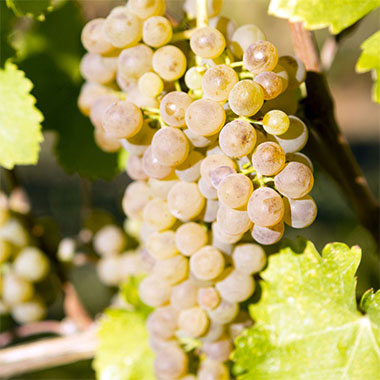 Muscat is a small, pale yellow-skinned white wine grape which is vastly planted all over the world with various names and it is considered to be one of the most ancient grapes known to the Roman Empire.

Muscat is also a family of grapes, particularly diverse and ramified with over 200 varieties but they almost always have a pronounced sweet floral aroma, characterised by a strongly aromatic bouquet of muscat, orange, apricot, peach and honeyed flavours. The styles of the wines produced vary from dry to very sweet, but the grape is most famous for its sweet expressions. The most celebrated and widely spread Muscat from the family is the Muscat Blanc à Petits Grains called in Italy Moscato, in Spain and Portugal Moscatel and in Austria Gelber Muskateler.

A great example of the varietal is made in the Grand Cru vineyards of Alsace. Muscat can be found in southern France as well, either in strong golden syrupy vins doux naturels labelled Muscat de Beaumes-de-Venise, Frontignan or Lunel or in super fruity, sparkling Clairette de Die or in strong tawny, sweet wines named Muscat de Rivesaltes from a large area in Roussillon. In South Africa is known as Muscat de Frontignan and gives to the world the luscious Vin de Constance. From Piedmont, Italy is coming the Moscato d'Asti a slightly fizzy, light sweetish and delicious wine. There are some popular members of the Muscat family under the names: Muscat of Alexandria, Muscat Ottonel and Muscat Hamburg.

Muscat of Alexandria is also the most common variety around the Mediterranean, including southern Italy and Sicily, where the grape is known locally as Zibibbo and produces some of the most famous Italian dessert wines, including the Moscato di Pantelleria and Moscato di Lipari.

Despite the vast diversity in the Muscat grape family, young, unaged wines tend to show the characteristic Muscat aromas. Fortified and aged examples tend to be very dark due to oxidation with notes of coffee, fruit cake, raisins and toffee.

Wines made with Muscat