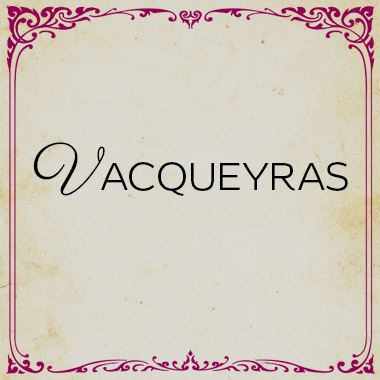 Vacqueyras is a notable appellation of the southern Rhône Valley wine growing region, along the banks of the River Ouvèze, Vacqueyrasis a relatively small appellation . The viticulture history of Vacqueyras dates back to the 15th century, but the records are very scarce until the introduction of the Appellation d'Origine Contrôlée (AOC) when it has become Côtes du Rhône AOC appellation in 1937. Over the years the quality has been steadily increasing until, in 1990 Vacqueyras has gained his own AOC status.

The climate in the appellation area is Mediterranean with a hot, dry and long growing season where most of the vineyards are planted on terraces along the Dentelles de Montmirail mountain range. The soil types are mainly sandy and stony, becoming clay-like in the southern part. This particular climate and soil particularly flavour the main grape variety, Grenache, which must account for at least 50%, while Syrah, Mourvèdre and Carignan must together account for at least 20%. There is a small production of rosé and white wines in Vacqueyras where the permitted grape varieties are Grenache Blanc, Bourboulenc, Clairette, Marsanne, Roussanne, Viognier, and one single variety may account for up to 80% of the blend.